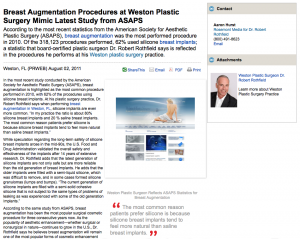 According to the most recent statistics from the American Society for Aesthetic Plastic Surgery (ASAPS), breast augmentation was the most performed procedure in 2010. Of the 318,123 procedures performed, 62% used silicone breast implants; a statistic that board-certified plastic surgeon Dr. Robert Rothfield says is reflected in the procedures he performs at his Weston plastic surgery practice.

While speculation regarding the long-term safety of silicone breast implants arose in the mid-90s, the U.S. Food and Drug Administration validated the overall safety and effectiveness of the implants after 14 years of extensive research. Dr. Rothfield adds that the latest generation of silicone implants are not only safe but are more reliable than the old generation of breast implants. He adds that the older implants were filled with a semi-liquid silicone, which was difficult to remove, and in some cases formed silicone granulomas (lumps and bumps). “The current generation of silicone implants are filled with a semi-solid cohesive silicone that is not subject to the same types of problems of leaking as was experienced with some of the old generation Implants.”

According to the same study from ASAPS, breast augmentation has been the most popular surgical cosmetic procedure for three consecutive years now. As the popularity of aesthetic enhancement—whether surgical or nonsurgical in nature—continues to grow in the U.S., Dr. Rothfield says he believes breast augmentation will remain one of the most popular forms of cosmetic enhancement because it is safe and has predictable results.

Dr. Robert Rothfield earned his medical degree from the University of Miami School of Medicine. He then completed his general surgery residency at Western Pennsylvania Hospital, an otolaryngology residency at the University of Pittsburgh Eye and Ear Institute, and a plastic surgery residency at Baylor College of Medicine. He is a Fellow of the American College of Surgeons, and a member of the American Society of Plastic Surgeons, the Florida Society of Plastic Surgeons, and the Florida Medical Association.

First want to give a special thanks to Dr. Rothfield and his amazing treatment team and staff, I’m pleased with the results and feel confident with my new look! Thanks again for your wonderful work.

Stay Connected
View Gallery
Contact Us For A Complimentary Consultation